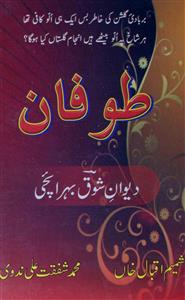 Penury, Indigence and poverty are destiny of the Urdu Poets from the very beginning. Shauq Bahraichi was also one of them. Born and raised in a middle class Shia Muslim family, Shauq chose the arduous path since, he was a critique of the government and the desolated society. In early age, Due to his father's death, his higher education was aborted  Eventually he bound to join small jobs in municipality. But, his mercurial character and predilection towards poetry pulled him from the mess of prosaic life.He began his career by saying 'Ghazals'. Gradually, he enlarged his domain in all other forms poetries. His laconic and audacious writings touched all the socio-economic issues with the shades of sarcasm and satire. Vilifying the social evils once he wrote,

Thebest part of his poetry is, he lampooned all the baneful issues of the society in the beatific way. "Thoofaan"  is the collection of his poetries which is collected and published by 'Shameem Iqbal khan' and 'Mohammad Shafqat Nadvi' after his death.
.....Read more