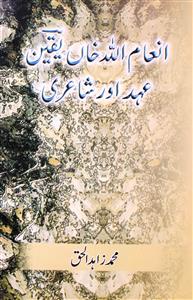 Dr Md. Zahidul Haque, born on 26th June 1977 at Araria, a district in the state of Bihar, INDIA. He got early education at the home town schools and later obtained Graduation degree from AMU, Aligarh. After Graduation he pursued higher education from JNU, New Delhi. He did M.A, M. Phil and Ph. D in Urdu from JNU, New Delhi. He was Junior and Senior Research Fellow of UGC during his research work. Having keen interest in the Classical Urdu poetry, he is involved in the comparative, critical and sociological study of the classical texts.

He started writing Ghazal at a very young age of 16 years but got into it seriously after his graduation. His Ghazals are published in various magazines

He has participated and presented his Ghazals in many International and National level Mushairas like the Mushaira Jashn e Bahar, Jashn e Telangana, International Mushaira organised by the Bihar Urdu Academy, Maulana Azad National Urdu University Mushaira, University of Hyderabad Mushaira etc are some of the important names to be mentioned.

He has four books and more than 30 articles, few book reviews and translations published in reputed international and national journals along with some chapter in books to his credit. His books include "Inamullah Khan Yaqeen : Ahad aur Shaeri" (2007), "Bisaat e Naqd" (2015), " Baig Ehsas : Fikr, Fan aur Shakhsiyat" (2016) and "Pas e Arz e Hunar" (2017). He has participated in more than 12 International and 20 National seminars and conferences. He has also been delivering special lectures in many prestigious institutions like NTM, CIIL, Mysore, MANUU, Hyderabad, APDUMT, JMI, Dept. of Art, Culture & Languages, Govt. of NCT of Delhi and UTRC, Lucknow etc to name a few.

For the last Eleven years, he is actively involved in teaching. He has been associated with the University of Delhi and SDBI College, University of Calcutta in the past. Presently he is working as an Assistant Professor in the Dept. of Urdu, University of Hyderabad for last seven years. He has successfully guided 03 Ph. D thesis and 14 M. Phil Dissertations so far and number of Ph. D and M. Phil work is in progress under his supervision.

He is recipient of the Imdad Imam Asar Research Award by the Bihar Urdu Academy, Govt. of Bihar.