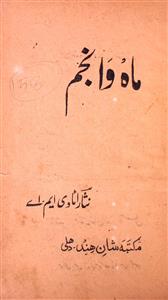 Nisar Husain was born on 1st March 1914 in Itawa. Due to failing times, he could not continue his studies after 8th standard and became a teacher in that very school on the salary of twelve rupees. During these days, he started poetry and was under the guidance from Sheda Itavi, who was the head master of that school. In 1951, he became a disciple of Seemab Akberabadi. He was terminated from the school in annual inspection for he had no degree of training but was reappointed as a temporary trainer on the persuasion of Bedam Warsi. During this temporary job he completed his graduation and masters in Urdu from Nagpur University and when that school turned into an inter college, he became head of the Urdu department and remained on this post till the time of his death. He was acquainted with Hindi and also passed the Vishesh Yogeyta exam of this language in 1935. Dharti Mere Pyar Ki is the collection of his poetry in Hindi while Maah-O-Anjum is a brief collection of his works in Urdu that was published in 1952. "Dareeche Zehan Ke" published by Baroda University, Baroda. Gujrat. He wrote under the pen name Nisaar. He was regarded as one of the best poetical products that were groomed under the guidance of Seemab Akberabadi. He died of throat cancer on 6 May 1947, in Itaava.