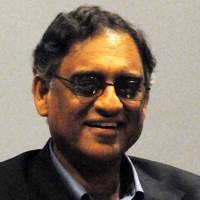 One of prominent short story writers, known for his literary journalism.

One of prominent short story writers, known for his literary journalism.

Asif Farrukhi is a Karachi-based author, critic and translator, writing in Urdu and English. Educated at Dow Medical College, Karachi and Harvard University, he has translated several Urdu works into English. He is the editor of the Urdu literary journal Dunyazad and co-founder of the Karachi Literature Festival. Asif Farrukhi has also published six collections of short stories and two collections of literary criticism. Farrukhi works for Habib University as Associate Professor and Director of the Arzu Centre for Regional Languages and Humanities. In 1995, Farrukhi received the Prime Minister’s award for literature, and in 2005 the prestigious Tamgha-i-Imtiaz (Medal of Excellence) from the President of Pakistan.