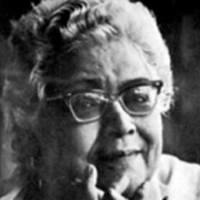 One of the most prominent fiction writers of the non-traditional kind, well known for her stories 'Lihaf' and 'Tedhi Lakeer'.

One of the most prominent fiction writers of the non-traditional kind, well known for her stories 'Lihaf' and 'Tedhi Lakeer'.

Ismat Chughtai is considered by many to be the fourth pillar of modern Urdu fiction along with Saadat Hassan Manto, Rajendra Singh Bedi, and Krishan Chandar. In terms of notoriety and fame, controversy and popularity, she is ahead of any other Urdu novelist. Her personality and her writings are complementary to each other and consist of rebellion, compassion, innocence, and sincerity. She made a name for herself in the world of Urdu fiction and novel writing due to her startling themes and realistic style of writing. The microscopic incidents of human life are the subject of her works, but she presents these events with such dexterity and artistry that a complete and vivid picture of daily life comes to the fore. Through her characters, she tries to expel the evils of society and make them a symbol of beauty, happiness, and peace.

Ismat Chughtai was associated with the progressive movement of Urdu, but unlike other communist writers of her time, she made internal, social, and emotional exploitation the subject of her stories instead of external, social exploitation. In her writings, Ismat tries to both understand and make her readers understand the issue of carnal desires with respect to human psychology. She has also raised the issue of equality between men and women which goes beyond domestic equality. Her stories have an air of a middle-income Muslim household where the everyday woman can be felt by the reader, but Ismat emphasizes on the point that this everyday woman, too, is human, and isn’t merely an object of copulation, she has her own physical and emotional needs which need to be understood and fulfilled. Ismat’s rebellious and fiery tone often leaves our established social construct high and dry.
Ismat Chughtai was born on August 21, 1915, in Badaun, Uttar Pradesh. Her father, Mirza Qasim Beg Chughtai, was a high-ranking government official. She was the youngest of nine siblings, all her sisters had been married until she gained awareness, thus, in her childhood, she only had the company of her brothers, and she continuously challenged their supremacy. Whether it was playing street football or horseback riding and climbing trees, she did everything that girls were forbidden to do. She studied up to the fourth standard in Agra, and till the eighth standard in Aligarh, but her parents were not in favor of her higher education, instead, they wanted to train her to become a decent housewife. But Ismat wanted to get further educated at any cost, she threatened to run away from home and become a Christian and enter into a missionary school if her education was not continued. Eventually, her father had to kneel in front of her stubbornness and she went to Aligarh and got admission in the tenth standard. In Aligarh, she met Rashid Jahan, who in 1932 together with Sajjad Zaheer and Ahmad Ali, published a collection of stories called "Angare" which was confiscated by the Britishers upon the charge of obscenity and mutiny. Rashid Jahan was a liberal and highly educated MBBS doctor and women's rights activist, with a communist ideology, who acquainted Ismat to the basics of communism, and Ismat decided to follow in her footsteps by making her her guru. Ismat later reflected, ‘I hated moaning women, who bore illegit children. Fidelity and beauty, which are considered a woman’s virtues; I condemn them. Love is a burden on the heart and nothing else. I learned this from Rashid Aapa.’ Ismat blamed illiteracy for the plight of women. After FA, she enrolled in an IT college in Lucknow where her subjects were English, Polity, and Economics. After arriving there, she got the opportunity to breathe in the open air for the first time and was freed from all the shackles of middle-class Muslim society.

Ismat Chughtai started writing stories at the age of eleven or twelve but did not publish them under her own name. In 1939, when her first story titled ‘Fasadi’ published in the distinguished journal Saqi, people thought it was her brother, a well-known writer, Azeem Beg Chughtai had written this story under a pseudonym. Later, in the same year, her stories like Kafir, Dheet, Khidmatgar, and Bachpan stirred the literary circles, and Ismat became known as an eminent author. In 1941 and 1942, two collections of her short stories came out titled ‘Kaliyaa.n’ and ‘Chuntii.n’. But her most talked-about work came in 1941, ‘Lihaf’ which explored the intimate relationship between two women, and caused havoc in the preserve of Urdu literature. Ismat was tried for obscenity and such the story became the focal point of her life’s work, so much so that it overshadowed all her remaining works like ‘JoDa’, ‘Genda’, ‘Nanhi Ki Nani’, and ‘Bhool-Bhulaiyan’, which were equally well-written.

After completing her graduation from IT college, teaching in different places, and some well-talked affairs, Ismat moved to Bombay where she got a job as an Inspector of Schools. There was also Shahid Latif in Bombay who used to write dialogues in Bombay Talkies for Rs. 225. Ismat had met Shahid in Aligarh while he was doing his MA. Arriving in Bombay, their stormy romance began and they got married. Ismat’s attitude towards the idea of love was quite unconventional. She said, ‘I consider love to be a very important thing; it’s the very strength of heart and mind, but a person should not become stingy in it, one should not become suicidal for its sake. There is an innate bond between love and sex, gone are the days when loved used to be a pious thing.’ That’s why when Shaid proposed her for marriage, Ismat, owing to her thoughts, replied ‘I am not an ordinary girl. All my life I’ve cut the chains that fettered me, I won’t be able to take up another shackle. Obedience, chastity, and other virtues expected of a woman do not suit me. Lest you repent in the end.’ But Shahid didn’t heed to her admonition. About her relationship with Shahid, Ismat later reflected, ‘A man can offer love, respect, and even prostrations toa woman, but he can’t give her an equal status; Shahid gave me an equal status’.

Shahid Latif had also introduced Ismat to the film industry. He had turned from a screenwriter to a producer. Ismat used to write stories and dialogues for his films which include Ziddi, Aarzoo, and Sone Ki Chidiya. After that, his films began flopping. Even after the death of Shahid Latif, Ismat remained associated with the film industry. ‘Garm-Hawa’, the famous film made on Indo-Pak partition was also written by Ismat, she had also written and played a small role in Shyam Benegal’s famous film ‘Junun’. Other films that saw Ismat’s writing grace their stories include ‘Chhed-Chaad’, ‘Buzdil’, ‘Shikayat’, ‘Shisha’, ‘Fareb’, and ‘Lala-Rukh’.

Ismat’s signature skill in her writings is her unique style of expression. Language is not only a means of expression in her stories but also an abstract truth in itself. Language can be seen as an animate object in many of her novels, including ‘Masuma’, ‘Dil Ki Duniya’, ‘Ek Qatra Khun’, ‘Saudai’, ‘Jungli’, ‘Ajib Admi’, and ‘Kabutar’. She considered ‘Dil Ki Duniya’ to be her best novel.

In return for her literary services, Ismat received many important awards and prizes from government and non-government organizations. In 1975, she was awarded the Padma Shri by the Government of India. In 1990, the Madhya Pradesh government awarded her the Iqbal Samman, the Ghalib Award, and the Filmfare Award. After illuminating the realm of literature for half a century, she left the world on October 24, 1991, and according to her will, her body was cremated at Chandanwari Electric Crematorium.