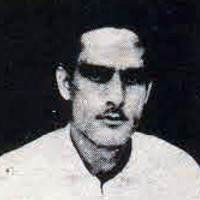 Solitude was the only companion of Kunwar Athar Ali Khan, whose pen name was Athar. He remained unmarried all his life. He was born on 22 February 1933 in Aligarh, but migrated to Pakistan in 1948. His association with Jung went on for a long time. Besides this, he worked on a number of posts of various departments. He was a columnist as well. Though literature had completely absorbed him at Aligarh, but his poetry stretched itself up to its full length in Karachi. Ghazal was his first love, though he penned free verses too. His collection of poetry got published under the title of Kalam from Funoon in Lahore in 1975. He was bedridden for a long period before he died at last on 21 November 1980.