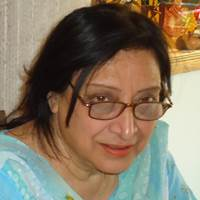 Fahmida Riaz was a woman poet and Urdu writer from Pakistan, known for her strong feminist and anti-establishment leanings. She was born on 28th July, 1945 in the India before partition, a literary family of Meerut, UP. Her family settled in Hyderabad after her father's transfer to Sindh. Her father passed away when she was four and so she was brought up by her mother. After completing her education she began working as a newscaster for Radio Pakistan. She had started writing at a very young age, managed her own Urdu publication named Aawaz. Aawaz was later banned for its revolutionary vision and publishing articles containing a liberal view on the then ruling government. Consequently her family had to spend almost seven years in exile. She had also held the post of MD at the National Book Foundation and also the Urdu Dictionary Board. Fahmida authored of several books like Godaavari, Khatt-e Marmuz, Khana e Aab O Gil, Pathar ki Zaban, Dhoop, Badan Darida, Karachi, Adhoora Aadmi, Khule Dareeche Se, Qafle Parindon Ke, Gulabi Kabotar, etc. Apart from this she also translated the masnavi of Maulana Jalaluddin Rumi from Persian to Urdu, Shah Abdul Latif Bhitai and Shaikh Ayaz from Sindhi to Urdu and Rumi's shayari into Urdu.