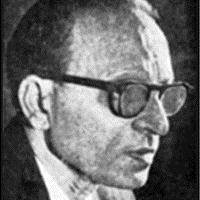 One of the important progressive poet, famous for his ghazals in bollywood films like 'Baazaar' and 'Gaman'.

One of the important progressive poet, famous for his ghazals in bollywood films like 'Baazaar' and 'Gaman'.

Makhdoom Mohiuddin was born at Andol in district Medak in Hyderabad on 4th Feb, 1908. He belonged to a religious family of teachers and preachers but Makhdoom was more interested in poetry and politics than in religion. He was the leading light of the progressive writers' movement and as a mark of respect the communist party of India has raised a building called "Makhdoom Bhawan" in Hyderabad. Though Makhdoom is primarily a poet of the nazm, he has also proved his ability as a ghazal writer. In addition, he has displayed his worth in the field of prose as well. His poetical works include Surkh Saveraa, Gul-e-tar, Basaat-e-raqs (complete works). He died in Delhi on August 25, 1969.