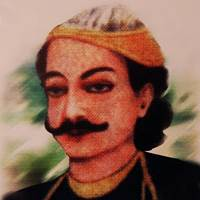 Considered to be the foremost poet of mathnawi.

Considered to be the foremost poet of mathnawi.

whoever comes takes his place here right by your side

how long with this displacement from you shall I abide

whoever comes takes his place here right by your side

how long with this displacement from you shall I abide

Meer Hasan Dehlavi is considered to be the foremost poet of mathnawi. He also practised other poetical forms but his fame rests primarily on his mathnawi entitled Sehr-ul-Bayan.

In his Tazkira-i-Shuara-i-Urdu, Meer Hasan has recorded his name as Meer Ghulam Hasan. He used Hasan as his nom de plume. There is a difference of opinion about his date of birth. According to Qazi Abdul Wadood, he was born in 1717 but Malik Ram in his Tazkira-i-Maah-o-Saal has recorded 1740-41 as the year of his birth. Meer Hasan was born in the locality of Syed Wada in the walled city of Delhi. Because of the deteriorating condition of Delhi, he migrated to Awadh with his father, Meer Ghulam Hussain Zahik. Mus’hafi has related that Meer Hasan was only twelve years old at the time of his migration. After migration, he stayed in Faizabad where he got associated with the estate of Nawab Sarfaraz Jung, son of Nawab Nawab Salar Jung. When the capital shifted from Faizabad to Lucknow in 1775, he also shifted to Lucknow where he ultimately died.