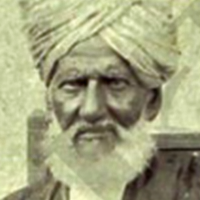 Munshi Amirulla Tasleem was born in 1819 at Manglasi village in Faizabad. He learnt Arabic and Persian in his childhood. Like his father, he also joined army but later left to join the poetic assembly of Wajid Ali Shah. Later, he also worked at Munshi Naval Kishore press as a proof-reader at a monthly salary of thirty rupees per month. Thereafter, he worked as an assembly poet of nawabs of Tonk, Mangrol, Rampur. All through his life, he lived a life of financial difficulties. He died in 1911. Tasliim's poetry had a reflection of Momin. Tasliim was a pupil of Nasim Dehlvi, a prominent student of Momin. Tasleem is famous for his ghazals as well as for his masnavis. Jigar Morababadi, Asgar Gondvi, Hasrat Mohani were pupils of Tasleem.