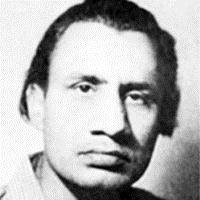 Naresh Kumar Shaad was a multifaceted personality. He was a poet, prose writer, translator, and also had the distinction of editing several journals. It is rather ironic that he is remembered for his habit of excessive drinking although he was a poet and writer of remarkable worth who also drew upon Western forms and genres to enrich his literary oeuvre.
Shaad was born in village Yahyapur in Hoshiarpur district of Punjab, on September 11, 1927. His father, Dard Nikodari, was also a poet and one of the distinguished disciples of Josh Malsiyani. His family environment helped him acquire his skills in writing verse at an early age. He studied at Government High School, Chunian, district Lahore, from where he passed his Matriculation examination in first division. Later, he worked at Rawalpindi and Jalandhar but resigned his government job to get back to Lahore and start editing journal Shalimar. Following India’s Partition, he lived for some time at Kanpur and edited a journal called Chandan in association with Hafeez Hoshiarpuri. After this journal seized publication, he came to Delhi and started editing Baldev Mittar Bijli’s journal called Raahi. He also brought out another journal called Nuqoosh. Relinquishing his career as an editor, he joined government service in Housing and Rent Department.
His collections of poetry include Butkada, Faryaad, Dastak, Lalkaarr, Aahatein, Qaashein, Aayaat-e Junoon, Phuaar, Sangam, Mera Muntakhib Kalam, Mera Kalam Nau ba Nau, and Wijdaan. His prose works are collected in Surkh Haashiye, Raakh Taley, Sarqa aur Tawaarud, Darling, Jaan Pehchaan, Mutalaye, Ghalib aur us ki Shairi, Paanch Maqbool Shair Aur Un Ki Shairi, and Paanch Maqbool Tanz-o-Mazah Nigaar. His writing for children may be seen in Chand Nagar Mein Cinema Aaya, Cheeni Bulbul, and Samundari Shehzadi.
On May 20, 1969, Shaad was found dead on the banks of river Yamuna.