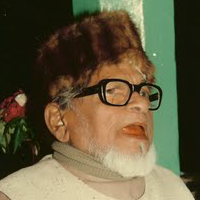 Nazir Banarasi is one of the popular names both in literary and popular circles. He was born on 25 Nov, 1909, in Banares. His father was a well-known practitioner of Unani medicine in Benares. Nazir also joined his father’s profession.

Nazir picked the material for his poetry from the conditions around him which made him acutely relevant to his readers. His poetry is thus a living record of contemporary scenario with respect to politics and society. He also wrote long poems on the prominent literary, social, and political personalities of his time. His publications include Gang-o-Jaman, Rashtra ki Amaanat Rashtra ke Hawaaley, Jawahar se Lal Tak, Ghulami se Aazaadi Tak, and Kitab-e-Ghazal.