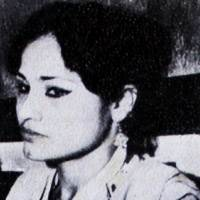 Sara Shagufta was a modernist Pakistani poet. She was born in a lower-class family. Her family migrated to Karachi from Punjab during the partition of India. Hers was a life of struggles. Belonging to a poor and uneducated family, she wanted to rise socially through education but could not pass her matriculation. She got married when she was 17. This was followed by three more unsuccessful marriages.  She was deeply hurt with the death of her new born son and the indifference of her husbands. Badly treated by her husbands and society alike inspired her to write poetry and she continued to write with rare zeal.

Indian author Amrita Pritam was a close friend of Sara. She wrote a book based on the life and works of Sara titled Ek Thi Sara (1990) which was translated into English as Life and Poetry of Sara Shagufta (1994). ‘Main Sara’, a play written by Shahid Anwar, is based on the life of Sara. ‘Sara Ka Sara Aasman’, another play writtrn by Danish Iqbal and directed by Tarique Hameed, is also based on her life. Based on Amrita Pritam's book on Sara, the play was presented by Wings Cultural Society at All India Radio's Urdu Theatre Festival in 2015.

Collections of her poetry were published posthumously as ‘Aankhein’ and ‘Neend Ka Rang’ by Saeed Ahmed, Sara’s love-interest. Asad Alvi translated her poetry into English and published it under the title- ‘The Colour of Sleep and Other Poems’ (2016).

Suffering from a mental illness, she had to be admitted into an asylum. After an unsuccessful suicide attempt, she finally committed suicide at an early age of 29, on 4 June 1984, around 11 PM, by throwing herself before a train.