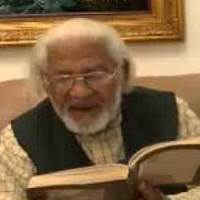 Syed Ejaz Ali Rehmani was born on 12 February 1936 in Aligarh. He was orphaned in his childhood, so he did not get proper education. He could only complete his elementary and religious education in Aligarh. In 1954, he moved to Pakistan and passed the exams of Adeeb and Adeeb Fazil and became an employee at the Ibrahim Industry of Usmanabad, Karachi. He kept composing qata’at for a local daily. He passed away in Karachi at the age of 83. He has been considered a remarkable poet of Naat. who wrote under the pen name, Ejaz. He has been the disciple of literary giants like Qamar Jalalwi who took him to his close friend Faza Jalalwi. Aijaz-E-Mustafa, Pehli Kiran Aakhri Roshni, Kaghaz Ke Safeeney, Afkaar Ki Khushbu, Ghubar-E-Ana, Lahu Ka Aabshar and Lamho Ki Zanjeer are the titles of his collections. Before his death, he was also composing the history of Islam in the form of poetry.