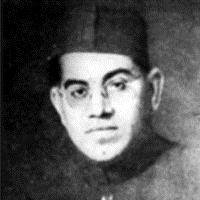 A leading Judge of the Allahabad High Court. Member of the 4th Lok Sabha

A leading Judge of the Allahabad High Court. Member of the 4th Lok Sabha

Anand Narain Mulla had the unique distinction of embodying the best values of the shared socio-cultural tradition of secular India. His saying, “ Urdu is my mother tongue! I can give up my religion but not my mother tongue,” underlines his respect for this language and its heritage.
Mulla was a native of Kashmir but one of his ancestors, Pandit Kali Das migrated to Lucknow and settled there for good. He was born there on 24 October, 1901, in the family of Pandit Jagat Narain Mulla. He received his early education at Firangi Mahal, Lucknow under Barkatullah Raza Firangi Mahali. Later, he passed his F. A. examination in 1919, B. A. in 1921, M. A. in English in 1923, and LL. B. in 1925 from Canning College, Lucknow. He studied law following which he set up his practice as a lawyer. Scaling new heights, he was appointed a judge at Lucknow High Court in 1955. After his career in the courts of law, he entered politics. In 1967, he got elected to the Parliament as an independent candidate, and in 1972, he was elected to the Rajya Sabha.  He also served as the chairperson of Anjuman Taraqqi Urdu.
Being a keen student of English literature, Mulla first wrote his poems in English but moved on to Urdu later. Lucknow, as a centre of literature and culture, contributed substantially to his development as a poet. He held a constructive and moral view of life and the world in his poetry. This was strengthened further with the impact of Iqbal on him as a poet. His efforts to transform the society into a better place are well reflected in his poetry and prose works. His poetical works are included in Joo-i Sheer, Kucch Zarre Kucch Taare, Meri Hadees-e Umr-e Gurezaan, Karb-e Aagahi, and Jaada-i-Mulla. He also translated the essays of Jawaharlala Nehru. Mulla was a recipient of many prestigious prizes. He passed away on 12 June, 1997 in Delhi.