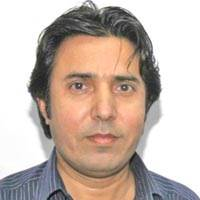 Prominent poet and journalist who has also been associated with television channel.

Prominent poet and journalist who has also been associated with television channel.

Fazil Jamili is a Urdu Poet and journalist. He is currently Editor of Jang (online editions Karachi). Before joining the Jang Group he was associated with Samaa Tv and Daily AajKal. He has been active in struggle for journalists' rights and elected twice as general secretary of Karachi Union of Journalists. He is also elected member of federal executive committee of Pakistan Federal Union of Journalists. He remained Chairman of Literary Committee of Karachi Press Club for years. Fazil Jamili was born in a small village called Pind Khan Khel, near Haripur, Hazara, in 1968. During early education at Government High School, he became the president of Bazm-e-Adab, and especially his romantic poetry thrilled the students. Later on he got a place in literary circles of Hazara as well as the whole country.