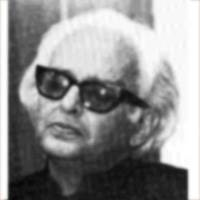 Ghulam Rabbani Taabaan is considered to be a prominent poet associated with Progressive Writers Movement. He subscribed to this movement both as a poet and an activist.

Taabaan was born on 15 February at a small place called Patwar near Qayamgunj in the district of Farrukhabad, Uttar Pradesh. He took his degree of LL. B, from Agra University and practiced law for some time. Not quite suited to this profession, he relinquished his law practice and shifted to Delhi where he worked at Maktaba Jamia Ltd., a prominent publishing house of Urdu books, where he continued working as its General Manager for a fairly long period.

His poetry represents a fine blend of classical poetics with Progressive poetics of the 1930s. In spite of his deep sympathies with revolutionary ideals, his poetry is characterised by a unique creative resilience which is not usually found in other poets who subscribed to Progressive ideology. He began his career by writing nazm but after the publication of his first collection called Saaz-e-Larzaan (1950), he started writing ghazals. His collections of ghazals include Hadees-e-Dil, Zauq-e-Safar, Nawa-i- Aawaara, and Ghubar-e-Manzil. In order to popularise his socio-political views, he also wrote essays in prose which were published in Siyasiyaat se Sheriyaat Tak.

Taabaan received several awards for his overall contribution to literature. These include Sahitya Akademi Award, Soviet Land Nehru Award, UP Urdu Akademi Award, and Bahadur Shah Zafar Awrad, apart from the prestigious Padm Sri Award from the Government of India which he later returned in protest against the rising communal violence in the country.   Taabaan passed away on 07 February, 1993