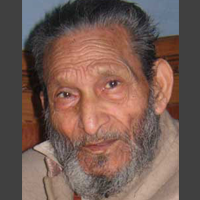 Hilal Sivharvi’s real name was Qazi Habib-ur-Rehman. He was born on 15 January 1928 in the town of Sivhara in Bijnor District (UP). His father's name was Qazi Fazal Haq, and Hilal had inherited his taste and interest in poetry form him. His great-grandfather Qazi Zahoor-ul-Haq was one of the prominent Persian and Urdu poets of his time. Hilal wasn’t much interested in education from and would often escape the bounds of Madrasas. Therefore, he was not formally educated, but the literary atmosphere at home and the climate of Sivhara‘s poetry and speech compelled him to study. He was a staunch opponent of bigotry in the social system and was heartbroken to see workers sweating for a living in the scorching sun. He resented the system of inequality and oppression. These were the reasons which made him think why not raise his voice against this outdated and exploitative system and for this he felt poetry was the best mode of expression. Hilal Sivharvi appeared on the literary scene through poetry and prose on both political and social issues with an earnest tone.

Although his writings are infused with the color of satire and humor, his poems became very popular in the country and abroad, in which he dealt with politics, anti-humanity, sectarianism and capitalism and fired arrows of satire.

Since Hilal was employed as a fitter in a mill, he got a chance to see the plight of the workers up close. He had the opportunity to feel the bitterness and oppressive system of his life and to live in the same environment. That is why he made the lives of the working people the subject of his poetry and performed the beautiful duty of molding his feelings and experiences in the form of poetry in a satirical tone. He also made the political system and the hypocritical mindset of national leaders the subject of poetry. He targeted those who lived a life of luxury and exploited the poor, raised knowledge against the mindset of the capitalists. He hurled arrows of satire at those who lusted for power and blamed those who sucked the blood of the poor.

Hilal's poetry has a satirical and interesting humorous aspect to it, but he also tries to touch on very serious and sensitive topics, which are of great importance in the context of the current environment. In short, it can be said that the modern issues and themes that Hilal has included in his poetry in a satirical and humorous manner are really the issues of every person, which every person is struggling with. His poetry is a combination of simplicity and fluency. The choice of words shows great ingenuity, which is the distinguishing feature of his poetry. His satire and humorous speech need to be examined from a literary point of view, so that the literary value of his speech can be determined. Contemporary literary critics have become so obsessed with Ghalib, Iqbal, Mir, Nazir and Akbar that they have never had a chance. When will they consider a poet of poetry like Hilal worthy of attention? Hilal took his last breath on November 15, 2012.