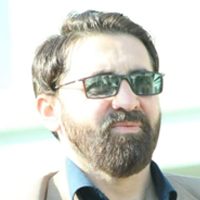 Dr. Ishaq Virdag is among the new generation of 21st century poets from Khyber Pakhtunkhwa and has come up among the prominent poets of the region owning to his modern accent and unique poetry. Initially, he dived into children's literature, and started writing in children's magazines from the seventh grade. For his contribution to children's literature, Dawat Academy International Islamic University, Islamabad awarded him the "Nishan-e-Ejaz". His children’s book “Aur Titliyan Rooth Gain” has also been published. In the second period of his literary life, he emerged as an innovative, modernist poet of Urdu ghazal and Nazm. Due to its unique tone, his poetry is gaining the attention of critics in Pakistan and abroad. Ishaq Wardak has the distinction of being the second poet of Pakhtunkhwa after the late Ghulam Muhammad Qasir, whose poetry was not only appreciated by the poet Zafar Iqbal but also published in his literary column several times. Prominent critic Dr. Tariq Hashmi writes in his book "Sheriyat-e-Khyber Asari Tanazur" in an analysis of his poetry:
"Ishaq Virdag seems to have a balance and at the same time he is aware of modern paradigms."
Ishaq Virdag 's poetic motifs include metaphysical themes, mysticism, loneliness, political tragedies, the issue of terrorism in Peshawar, the issue of identity, and the philosophy of existence and human values.

In 2007, when the Arbab Zauq constituency in Peshawar was revived after a long hiatus, Ishaq Virdag was elected as the founding secretary in the new era. He continued to hold constituency meetings despite terrorism and bombings, and began a series of discussions on the effects of modernity on Urdu ghazals, poems, fiction, criticism, and novels in order to understand modernist literature.

His first collection of poetry, "Shahr mein Gaon Ke Parinde", is about to be published.

Ishaq Virdag was born on April 24, 1977 in Kocha Risaldar, Peshawar. He is currently associated with Urdu Literature as an Associate Professor in the Department of Urdu, Government Post Graduate College, Timergara Dir.