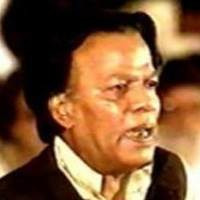 Popular poet, a fine exponet of the language and culture of Lucknow.

Popular poet, a fine exponet of the language and culture of Lucknow.

in golden frame you may display

untruth the mirror will not say

in golden frame you may display

untruth the mirror will not say

Krishn Bihari 'Noor' was born at Gauss Nagar, Lucknow on 8th November 1926. He did his basic education at home. Later, he was admitted to a high school at Aminabad (U.P). After completing his graduation from Lucknow University, he got employed in the RLO department of Lucknow, where he worked for a long time and retired on 30th Nov 1984 as the Assistant Manager. Noor Saheb, a disciple of Fazal Naqvi and proficient in both, Urdu and Devanagri scripts was basically known for his ghazals in literary circles. His noted works include, Dukh-Sukh (Urdu), Tapasya (Urdu), Samandar Meri Talash Mein (Hindi), Hussainiyat Ki Chaaon Mein, Tajjalli-e-Noor, Aaj Ke Prasidh Shaayar (Edited by Kanhya Lal Nandan), etc. He died while undergoing an operation at a hospital in Ghaziabad on 30th May 2003.