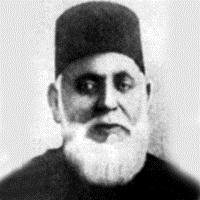 Well-known poet known for his poetry on wine, though he is said to have never touched wine.

Well-known poet known for his poetry on wine, though he is said to have never touched wine.

Though every poet has written about wine in Urdu poetry, but the way Riyaz Khairabadi has depicted it is almost unparallelled. Riyaz was born in 1853 at Khairabad in Sitapur district. His father Syed Tufail Ahmad was a police officer and Riyaz also worked initially in the police department but soon resigned. He started publishing "Riyazul Akhbar" and "Taarbarqi" from Gorakhpur in 1872. In 1908, he came to Lucknow on invitation by Maharaja Mahmudabad and spent his life there only. He died on July 20, 1934 and was buried in Khairabad. Riyaz was a pupil of Amiir Minai. However, his poetry had more shade of Daag than Lucknavi influence. He has written lots of ghazals about wine though he himself never touched wine. Apart from ghazals, Riyaz has written Qasida, Masnavi, Naat and other forms of poetry but his fame is because of his ghazals. His only collection is "Riyaz-e-Rizvan".