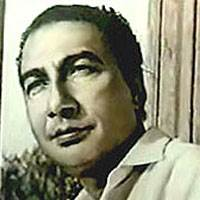 One of the leading Progressive poets and film lyricist.

One of the leading Progressive poets and film lyricist.

Sahir Ludhianvi, who has been labeled by objectors as "Anfwan-e-Shabab Ka Shayar" for his poetry, in particular, for stirring the hearts of youngsters and writing literary songs for films, is one of the popular poets and the pride of progressive poetry. The way in which Sahir has given poetic form to their emotions and moods has not been given by any of his contemporary poets. The fact is that by mixing romance and protest, Sahir, with his individuality, gave a new direction to the poetry of the progressive movement. There is a warmth and warmth in his political and protest poems. His choice of words, method of using similes and metaphors is so complete and comprehensive that it is beyond the reach of other poets. Even older poets recognize him as a real poet and his poems meet the standard of criticism. The combination of song, music and lyricism made his ghazals, poems and songs more effective and popular.

Sahir was born on March 8, 1921 in a feudal family of Ludhiana and was named Abdul Hai. His father's name was Chaudhry Fazal Mohammad and he was his eleventh, but secretively, first child to his illegit wife Sardar Begum. Later, her mother insisted that their relationship be made official so that no inheritance dispute would arise in the future. When Chaudhry Sahib did not agree to this, Sardar Begum took Sahir and separated from her husband. After that, there was a period of litigation between the parties for the custody of Sahir. Sahir was brought up in his maternal home. When he reached the age of going to school, he was admitted in Malwa Khalsa School from where he passed the matriculation examination. At that time, Ludhiana was a vibrant and active center of Urdu. From here, he developed a passion for poetry and on reaching matriculation, he started reciting poetry. In 1939, after passing the entrance examination from the same school, he entered Government College, Ludhiana. At the same time, his political consciousness began to awaken and he was attracted to the communist movement. In the last year of BA, he fell in love with one of his classmates, Asher Kaur, and was expelled from college. He could not do BA from college, but the circumstances turned him into a romantic poet. His first collection "Talkhiyan" was published in 1944 and instantly became a sold out. After leaving the college he moved to Lahore and enrolled in Dayal Singh College but due to his political activities he was also expelled from there. He became the editor of Adab-e-Latif, a standard literary magazine of the time. Later, he also edited Sawera and his literary magazine Shahkar. At the same time, a friend of his from college joined the freedom movement. He was making a film "Azadi Ki Rah Par". He invited Sahir to write his song and Sahir moved to Bombay. The film did not succeed and Sahir had to work hard to make his place in the film world as a lyricist. One of the reasons for this was that he was not ready to write songs with only popular appeal and no essence. Coincidentally, he met SD Burman, who needed a lyricist of his own temperament. Burman gave him a tune, and Sahir wrote the still-famous number ‘Jab Chali Thandi Hava’, Burman loved the lyrics. After that he started writing songs regularly to the tunes of SD Burman and the duo gave many memorable songs.
Sahir also had his fair share of love affairs, like Amrita Pritam and Sudha Malhotra, but he never got married. His relationship with Amrita was strange and intense, although Amrita was married, whenever Sahir would visit her and leave after smoking a cigarette, she would pick up the broken pieces of his extinguished cigarettes from the ashtray and put them on her lips after lighting them again. In Sudha’s case, she left Sahir for someone else, despite this Sahir did not spare any effort in promoting Sudha in the film industry. And it was for her that Sahir wrote the immensely popular Nazm ‘Chalo Ik Baar Phir Hum Ajnabi Ban Jaen’. After becoming a very successful songwriter of films and becoming financially well-off, Sahir became mentally incapacitated. He made some queer demands like writing songs on his own compositions, and even imposing SD Burman to compose a tune on his words, which the latter did not take to well. He also demanded that he be paid one rupee more than Lata Mangeshkar for the song which involved their work, and which was an unreasonable condition. However, he also made a reasonable demand that the name of the lyricist should also be announced in the songs aired on Vivid Bharati. This demand was accepted. Sahir wrote countless hit songs. He received the Filmfare Award for Best lyricist in 1964 and 1977.
Sahir expanse and range of poetic motifs is also quite matchless. He has written political poetry, romantic poetry, psychological poetry and revolutionary poetry in which the rebellion of peasants and workers draws our attention. In his Nazms, there is a special vista of his personal experiences and observations. In recognition of his literary services, he was awarded the Padma Shri in 1971. In 1972, the Maharashtra government awarded him the "Justice of Peace" award. In 1973, he was awarded the "Soviet Nehru Award" for his work ‘Aao Koi Khwab Bunen’. He received the Maharashtra State Literary Award. In 1974, the Government of Maharashtra nominated him as a 'Special Executive Magistrate'. His poems have been translated into various languages of the world. He died of a heart attack in 1980.