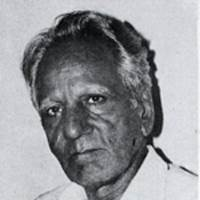 Saifuddin Saif was born in Amritsar in 1922. He wrote some very powerful poems during his college days. He was always inclined towards writing for films, but the films for which he had written lyrics before partition were not released due to the unfavorable conditions in the subcontinent. Saif penned songs for Teri Yaad (1948) which was the first film to be released in Pakistan and received admiration for the freshness of his poetry.

Hichkoley (1949), Amanat (1950) and Naveli (1952) were his earliest films, but his career truly flourished in 1953 when his songs in Ghulam, Mehbooba became hits. Saifuddin Saif inaugurated his own film making company ‘Rehnuma Films’ in 1954. He scripted and presented a film Raat Ki Baat under this banner, which flopped miserably, but his next movie, in 1957, titled Saat Lakh, literally minted money, as its name and script suggested. In 1959, he came up with another gem, which was Kartar Singh. He wrote its sterling script and dialogues and also directed it with a perfect vision.

He compiled his ghazals and nazms in the collection titled ‘Kham-e-Kaakul’.