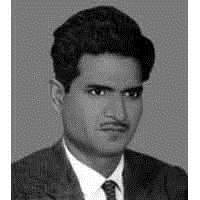 Famous poet from Pakistan. Committed suicide at an early age.

Famous poet from Pakistan. Committed suicide at an early age.

Shakeb Jalali was an India-born Pakistani Urdu poet. His real name was Syed Hasan Rizvi. His ancestors were from a small town, Jalali, near Aligarh, India. At the age of ten, he lost his mother in a road accident and his father lost his mental balance and died later. He passed his matriculation and then moved along with his sisters to Rawalpindi, Pakistan. Jalali worked in many literary magazines and then moved to Lahore, where he did B.A. and found employment in local newspaper. He wrote Urdu ghazals with grace and also tried his hand at writing nazm, rubayi, qataat etc. He committed suicide on railway tracks in 1966 for some unexplained psychological disease.