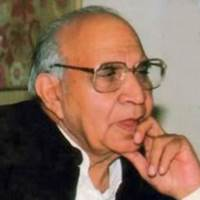 Syed Zamir Jafri was born on 1st January, 1914 in Chak Abdul Khaliq, a village near Dina, District Jhelum. He was a legend poet who with his unique poetic diction and ideas ruled urdu literature for over 60 years. He was a learned person and trend setter using all his abilities with firm commitment which paved the way for humorous poetry in tandem with serious poetry. A true patriot who very effectively made his pen a source of preaching message of peace and love for the man kind. His writings are a valuable asset of urdu literature. A poet of excellence who made his mark in the field of urdu literature with his wit and humour. He has about 78 published books of poetry and prose representing a varied range of creative works.