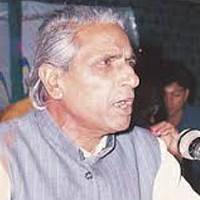 Irshad Ahmed was famous in literary world as Ummeed Fazli, which was his pen name. He was born on 17 November 1923 in Dibaaii of district Bulandshahar. Having finished his graduation from Aligarh Muslim University he joined the office of military accounts in Meerut and remained associated with the same department after his arrival in Pakistan. He followed Shakeel Badayuni as his literary guide, in his early age. He composed not only ghazals but also marsia or elegies . Dariya Aakhir Dariya Hai, Sar-E-Nai Nawa, Mere Aaqa, Tab-O-Taab-E-Jawidaana and Pakistan Zindabad are the collections of his poetry. He passed away on 29 September 2005. He was brother of eminent Urdu poet Nida Fazli.