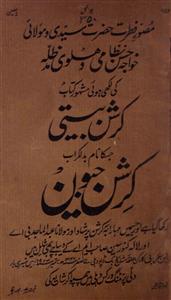 It would surprise many that a major descendant of Chishti lineage, Khwaja Hasan Nizami, who was a celebrated litterateur, historian, journalist, and prose stylist, also wrote a book on Sri Krishna called Krishna Beeti. Interestingly enough, and to add to this, he went on a pilgrimage to the holy places of the Hindus in the attire of a sadhu, and also wrote an account of his pilgrimage entitled Teerth Yatra which remained unpublished for some reason. He also studied the philosophy of Vedanta as a liberal human being. After his critical readings of the lives, ways, and teachings of Sri Ramchandraji, Sri Krishna ji, and Mahatma Buddh, he proclaimed that their lives and teachings clearly corresponded with those of Hazrat Ibraheem, Hazrat Isa, and hazrat Musa and they propagated the same knowledge which is often referred to in the Holy Quran.

Nizami wrote a booklet against cow slaughtering entitled Tark Qurbani Gau. While referring to religious sources, he argued in a logical manner that cow slaughter was neither an appropriate act, nor an Islamic practice. He also posited that the Mughal emperors Baber, Akbar, Jahangir, and others had also banned it during their times. Referring to various scholars and intellectuals, he argued further that protecting cows is indeed equal to protecting human beings. This liberal and enlightened intellectual of his times was, indeed, a great symbol of unity and national integration.

Khwaja Hasan Nizami was born Syed Ali Hasan in 1879 at Basti Hazrat Nizamuddin in Delhi. His parents, Syed Aashiq Ali Nizami and Syeda Chaheeti Begum were connected to Hazrat Ali Murtuza in their lineage. Nizami received his early education at Hazrat Nizamuddin itself and  was taught by the great teachers like Maulana Ismail Kandhelavi and Maulana Yahya Kandhelavi. He went to Maulana Rasheed Ahmed Gangohi’s Madrasa Rashidia to complete his education. At the age of eighteen, he was married to Syeda Habeeb Bano who was the daughter of his uncle Syed Mashooq Ali.

Khwaja Hasan Nizami had a childhood full of difficulties. His father met the daily needs of his family by working as a book binder. Nizami himself earned his bit to assist the family by keeping the shoes of visitors to the mausoleum. He also worked as a hawker selling books and photographs of the city of Delhi.

Nizami belonged to the family of Sufis. Following the family tradition, he came under the tutelage of Khwaja Gulam Fareed and accepted him as his spiritual master. After his demise, he came to Mehar Ali Shah Goldawi whom he accepted as his next spiritual master. He was associated with the dargah but he did not like to remain attached to it merely as a descendant who thrived on the past glory of others. This took him to explore other modes of earning his livelihood. He took to journalism and also organized a group of like-minded ones to establish Halqa Nizam-ul-Mashaikh and published a journal called Nizam-ul-Mashaikh under its banner. He also edited a weekly publication called Tauheed that was owned by his friend Ehsan-ul-Haq. Finally, he came to publish his own journal entitled Munaadi.

Nizami had also earned a number of rivals and enemies. They spread a canard that he was actually a mole of the British. This led to several propagandist publications against him in the newspapers. To counter the influence of Nizami’s Munaadi, they launched another weekly newspaper with the same name as Munaadi.


Nizami was not deterred by these maneuverings and continued working with greater commitment. His endeavors bore fruits and he gained enough acceptability and appeal amongst people through his writings. His livelihood also depended on his writings which he doggedly pursued and kept away from the free gifts received as tokens of reverence at the dargah by the believers. He had also started a dispensary where medicines were made and sold to the sick. Interestingly, he also made Surma and called it Urdu Surma. To sell it better, he placed an advertisement in his Munadi which said, “Today, I have prepared a surma. I have called it Urdu Surma because the Urdu language also brightens your eyes as this surma does”.

Nizami would be remembered in the annals of Urdu literature for several reasons. He was the person who gave diary writing its prestige as a literary genre. He was also the one who wrote sketches and authenticated it as a genre. As a journalist too, he is considered quite favorably. A good number of daily newspapers, weeklies, and monthly journals were published with him either as editor, or as patron. He was associated with important publications like Nizam-ul-Mashaikh, Rayyat, Deen Duniya, Munaadi, Aastaana, etc in one way or the other.

Nizami was also a historian of his own kind. He had very closely studied 1857 as a major phenomenon of Indian history. His publications on issues related with this consequential event are considered to be substantial contributions towards the understanding of India’s struggle for freedom. These studies of great historical merit include: Begamaat ke Aansoo, Ghadar ke Akhbaar, Ghadar ke Farmaan, Bahadur Shah Zafar ka Muqaddama, Ghadar ki Subh-o-Shaam, Muhasra-i-Dehli ke Khutoot.

Nizami wrote on a variety of subjects and emerged as a true scholar in the traditional sense of this term. Apart from what has been mentioned above, he also wrote his memoirs and travelogues that recount his travels to Arab, Egypt, Syria, India, and Pakistan. His two other books of considerable interest and significance are Gandhinamah and Yazeednamah.

Nizami also wrote light essays. Some of the more interesting ones are “Jheengur ka Janazah,” “Gulab Tumhara Keekar Hamaraa,” “Murgh ki Azaan,” “Macchar,” “Makkhi,” and “Ullu”. He was a prose stylist like no other. In fact, he was the one who initiated a way of writing which came to its end with him only.

Khwaja Hasan Nizami passed away on 13 July, 1955. He is buried at Basti Hazrat Nizamuddin, a place where he was born seventy six years ago. 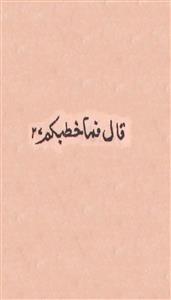 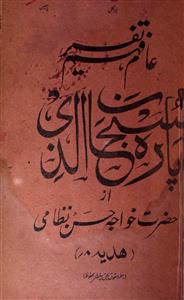 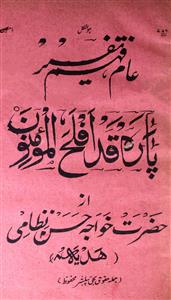 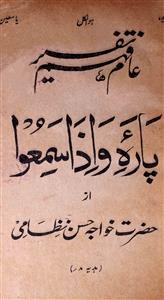 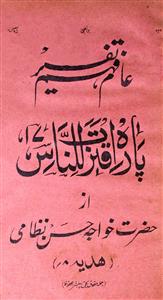 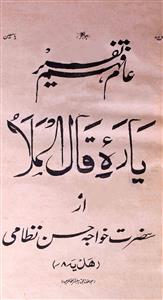 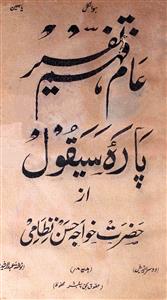 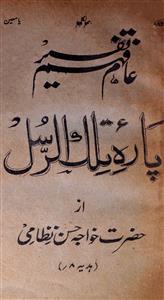