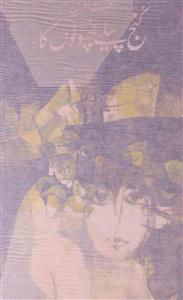 Ishrat Afreen (Ishrat Jehan) was born on 25 December 1956 into an educated family in Karachi, Pakistan. She later took the pen name Ishrat Afreen. The Urdu poet and women’s rights activist named one of the five most influential and trend-setting female voices in Urdu Literature. Her works have been translated in many languages including English, Japanese, Sanskrit and Hindi. The renowned ghazal singers Jagjit Singh & Chitra Singh also performed her poetry in their anthology, Beyond Time (1987). Famed actor Zia Mohyeddin also recites her nazms in his 17th and 20th volumes as well as his ongoing concerts.

She was first published at the age of 14 in the Daily Jang on 31 April 1971. She continued writing and was published in a multitude of literary magazines across India and Pakistan. She eventually became assistant editor for the monthly magazine Awaaz, edited by the poet Fahmida Riaz. Parallel to her writing career she participated in several radio shows on Radio Pakistan from 1970–1984 that aired nationally and globally. She later worked under Mirza Jamil on the now universal Noori Nastaliq Urdu script for InPage.

She married Syed Perwaiz Jafri, an Indian lawyer in 1985 and migrated to India. Five years thereafter, the couple and their two children migrated to America. They now reside in Houston, Texas with their three children.

Ishrat Afreen is currently the Principal Urdu Lecturer for The University of Texas at Austin’s Hindu Urdu Flagship Program.[2]

Afreen pursued her undergraduate education at the Allama Iqbal Govt College Karachi and later received her master’s degree in Urdu Literature from the University of Karachi, Pakistan. She also taught at the Aga Khan School and boardinghouse.

Afreen has published two collections of poetry entitled Kunj Peeleh Poolon Ka (1985) and Dhoop Apne Hisse Ki (2005). Amongst others, she has been included in the prestigious anthology We Sinful Women and inspired the well-known anthology Beyond Belief: Contemporary Feminist Urdu Poetry. Ishrat Afreen ki Shairi was a book written solely on Afreen’s poetry by novelist and literary critic Ikram Barelvi. From Beyond Belief:

In a society which is heavily male-dominated and devoted to the past, it is not surprising then, that the most popular women poets would be those who conform to both socio-cultural and literary traditions. Yet, the women poets who attracted my interest and whose work I have found the most exciting, represent the brave departures from that literary tradition. I have tried to bring together in this selection the contemporary strain in Urdu poetry by Women; to put across a strength of feminist feeling and conviction that I myself never knew existed until I came across Ishrat Afreen’s debut collection: A Grove of Yellow Flowers which prompted a search for more of the same.

Afreen was honoured with many prestigious awards including the Sajjad Zaheer Award in 1986. Afreen received this honour on the 50th anniversary celebration of the Progressive Writers’ Association of India in New Delhi.

Afreen also received the Ahmed Adaya Award from Urdu Markaz International in Los Angeles on 9 December 2006 after her book, Dhoop Apne Hisse Ki was selected by the International Urdu Jury as Best Urdu Poetry Publication of 2004–2005.

Afreen has been invited to attend many International Conferences and Festivals. She was selected to represent Pakistan in the Kavita Asia Asian Poetry Festival of 1988 in Bhopal, India which celebrated the greatest literary minds from across the Asian continent.

In September 1999, she partook in the International Poetry Festival in Stavanger, Norway.

She continues to lecture, hold workshops, attend conferences and read her poetry at Mushairas across America, Europe and Asia.