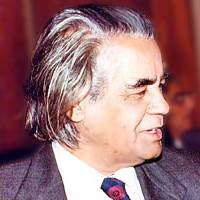 One of the most celebrated progressive poets, literary critic, public intellectual and editor.Contemporary of Faiz Ahmad Faiz. Recipient of Gyanpeeth Award. Produced documentaries on Urdu poetry.

One of the most celebrated progressive poets, literary critic, public intellectual and editor.Contemporary of Faiz Ahmad Faiz. Recipient of Gyanpeeth Award. Produced documentaries on Urdu poetry.

Ali Sardar Jafri was born in 1913 at Balrampur in the district of Gonda, U.P. He was brought up in a religious atmosphere at Lucknow. He did his Master's from Lucknow University. It is said that at the age of eight, he could recite a 1000 verses from the poetry of Anis. He himself began writing when he was only fifteen. His literary career began at the age of 17 when he began writing short stories. His entry into the world of Urdu literature began with short stories from his collection Manzil (1938). However, he soon turned to poetry and devoted most of his time to this genre. His revolutionary and patriotic poetry brought him into the limelight, following which, in 1940, he was also taken into custody for his political activities. He also worked as a member of the Communist party of India and participated proactively in its trade union activities. Through his poetry, he tried to create political awareness among the masses. Jafri had multiple talents and other than poetry he also wrote plays and short-stories. He was the editor of Naya Adab, a quarterly magazine published from Mumbai. He also successfully translated a few works of Shakespeare. He was instrumental in reducing the gap between Urdu and Hindi by publishing the works of four classical poets, i.e., `Ghalib, Meer, Kabir and Meera, in both languages together in the same book. To felicitate his contribution in the field of literature and journalism, Jafri received many honors and awards. He was also honored with the Padma Shri in 1967. In 1999, when Prime Minister, A. B. Vajpayee made a historic peace trip to Pakistan, he presented Sarhad, the first-ever album of anti-war poems of Ali Sardar Jafri (sung by Seema Anil Sehgal) to his Pakistani counterpart. This was indeed the greatest tribute to the poetic vision of Jafri. He died in Mumbai on 1st Aug, 2000.