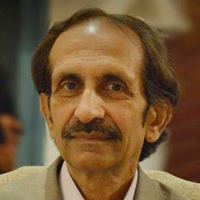 Born in Pakistan (1953), Basir studied and taught English at the Government College Lahore. He edited Ravi (1974). He came to the UK in 1990 and did his M.Ed and M.Phil from the University of Manchester. He was the news editor/reader for the BBC’s Asian Programme (1990-91) and a Literature Adviser to the North West Arts Board (1993-1996). Basir has taught at a few high schools, colleges and two universities (Bradford & Chester) in the UK.  Basir’s collected works Shajar Honay Tak (2015) includes four collections of poetry, Mauj-e-Khayal (1997), Chaman Koi Bhi Ho (2009), Hawa-e-Tarab (2015), Chaunsath Khanay Chaunsath Nazmein (2015), a long play Bisaat (1987) and three short plays. English translation of Basi’s long play Bisaat was published as The Chess Board (1997) and of poetry as Passing Through (2014). Translations of his ghazals and poems have also appeared in many magazines and anthologies of UK. Basir has also written extensively on the life and poetry of his father Nasir Kazmi (1925-1972), a famous Urdu poet. Basir won a North West Playwrights Workshops Award in 1992. His plays were performed at many Northern theatres. His poem, ‘Taking Time’, selected by the Poems for the Waiting Room Project (2001), was displayed in UK hospitals and clinics. One of his couplets, with English translation, was carved in stone and installed at McKenzie Square Slough, UK in 2008. Basir has been awarded an MBE (2013) for Services to Literature as a Poet.

Basir’s poetry and plays have been widely appreciated in the literary circles. According to Debjani Chatterjee MBE, “Basir Sultan Kazmi’s poetry is distinguished by its craftsmanship, elegance and lyrical imagery. It is poetry that is rooted in the richness of Urdu tradition, but also looks outwards to world literature.”