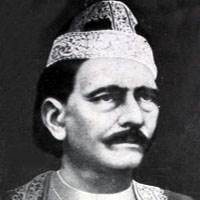 One of most firebrand poets of Lucknow. Contemporary of Meer Taqi Meer. His rivalry with Mushafi is well-recorded. He had also written rekhta poetry and 'Raani Ketki ki kahani" in prose.

One of most firebrand poets of Lucknow. Contemporary of Meer Taqi Meer. His rivalry with Mushafi is well-recorded. He had also written rekhta poetry and 'Raani Ketki ki kahani" in prose.

Insha Allah Khan (1752-1817), better known by his pen name of Insha, was born in Murshidabad where his father, Mir Masha Allah khan, a royal physician and also a poet, had migrated from Delhi following the decline of the Mughal Empire and received the patronage of Nawab Sirajuddaulah. Insha received his early education and advice on his poetry mostly from his father. Later, his father brought him back to the court of Shah Alam II in Delhi who valued his poetry, his verbal dexterity, and his ready wit. With the fall of Delhi durbar, Insha migrated to Lucknow where he joined the court of Nawab Mirza Sulaiman Shikoh, a poet and a patron of poets, and became his favourite to the extent that the nawab replaced his mentor Ghulam Hamdani Mus’hafi and appointed Insha in his place. This led to a legendry rivalry between these two major poets of the age which subsequently became a part of the Urdu’s literary history. As Insha was a sociable person and wanted to explore better opportunities in life, he also developed a good relationship with Nawab Sa’adat Yaar Khan. However, his acerbic tongue and derisive remarks, which he made without much consideration, landed him in disfavour with his patrons and contemporary poets. With the seizure of stipend from his patrons and left with no sources of sustenance in the later period of his life, Insha lived a life of misery in Lucknow where he died and lies buried.

Insha was a remarkable polyglot and had a unique expertise in various languages and dialects like Arabic, Persian, Turkish, Punjabi, Pushto,  Marathi, Kashmiri, Poorabi, Rekhti, Marwari, and Hindi. He could also compose verses in them. He is valued as the first author of a complete grammar of Urdu language in Persian called Daryaa-i-Lataafat. He also wrote a fascinating fictional narrative called Raani Ketaki ki Kahaani that did not have a word of Arabic and Persian in it. It also happens to be the earliest work of Urdu prose. Endowed with unique resourcefulness with the written word, he could appropriate a great variety of ideas, events, and anecdotes into his poetry. Insha has left behind his works in various forms and genres of ghazal, qasida, and mathnawi in Persian and Urdu, apart from miscellaneous poetical compositions in the forms of hamd, naat, manqabat, qita, rubai, hajw, and riddles.