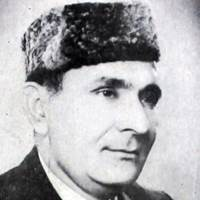 Krishan Mohan was the takhallus of Krishan Lal Bhatia who was born on 28 November 1922 in Sialkot. His father, Ganpat Rai Bhatia, was an advocate in the District Courts of Meerut. Ganpat Rai was also an Urdu poet; his takhallus was Shakir. After completing his school studies, Krishan Mohan obtained his B.A. (Hons.) degrees separately in English and in Persian as a student of Murray College, Sialkot where he was also the editor of the college house magazine. Later on he obtained his M.A. degree in English Literature from Government College, Lahore. After partition of British India his family moved to Karnal where Krishan Mohan found temporary employment as Welfare Officer. There after, he worked as Sub-editor and Assistant editor of All India Radio’s publication “Aawaaz” at Lucknow and Delhi, and then as a journalist with the Press Information Bureau before joining the Indian Revenue Service as Income Tax Officer. Twenty eight books of collection of his poems have been published so far including 'Shabnam Shabnam', Dil-e-naadaan', 'Tamaashaai', 'Ghazal', 'Nigah Naaz',' Aahang watan', 'Beraagi Bhanvraa', 'Shiiraaza', 'Miishgaan', 'Gyan Marg Ki Nazme', 'Kufristaan', 'Udaasi ke Paanch roop', 'Har-jaai', 'Teri Khusbuu', etc. Krishan Mohan died in Delhi in the year 2004.