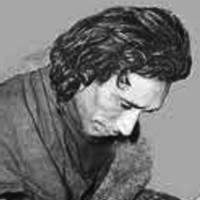 Saghar Siddiqui was born in 1928 in Ambala (in united Punjab under British India). Siddiqui started writing poetry as a child. He moved to Amritsar (Punjab), in search of work and used to make wooden combs while writing Urdu poetry. For some time, he used Nasir Hijazi as his pen name, but later he switched to Saghar Siddiqui. When 16 years old, he regularly started attending mushairas (poetry recitals) in Jalandhar, Ludhiana and Gurdaspur. In 1947, when he was 19, he migrated to Pakistan during the independence and settled in Lahore. In those days with his slim appearance, wearing pants and boski (yellow silky cloth) shirts, with curly hair, and reciting beautiful ghazals in a melodious voice, he became a huge success. He had some tragic turns in his life. Siddiqui continued to write poetry for the film industry and moved on to publish a literary magazine.

The magazine was a critical success but a commercial flop. Disappointed, Saghar shut down the magazine. In his later life, he fell into depression, got financially ruined and addicted to drugs.

As friends and strangers continued to exploit him, Siddiqui fell further into despair and was soon turned out of hotels and had to live on the street as a beggar. He was often seen along Circular Road of Lahore, and in Anarkali Bazar, Akhbaar Market, Aibak Road, Shah Alami, and around the Data Darbar area. He would often hold mushairas on the footpaths, in candle light. He continued to write poems, though most of them are lost and unpublished.

In July 1974, Siddiqui was found dead on a street corner of Lahore at age 46. He was buried at the Miani Sahib graveyard. His dog also died a year later, reportedly at the same spot. His mausoleum at Miani Sahib graveyard in Lahore is marked with a commemorative shrine which was built later.