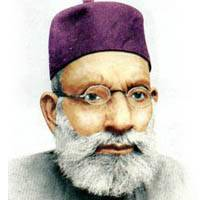 Freedom fighter, member of constituent assembly which drafted Indian Constitution. He gave the slogan "Inquilab Zindabad" during freedom movement. He was a devotee of Shri Krishna. He wrote the famous ghazal "chupke chupke raat din".

Freedom fighter, member of constituent assembly which drafted Indian Constitution. He gave the slogan "Inquilab Zindabad" during freedom movement. He was a devotee of Shri Krishna. He wrote the famous ghazal "chupke chupke raat din".

Syed Fazlul Hasan (1878-1951) who chose the nom de plume of Hasrat was born at Mohan in the Unnao district of Uttar Pradesh. After receiving his early education in Arabic, Persian, and Urdu at home, he moved to Aligarh where he acquired his degree of B. A. but abandoned his further studies in law that he had joined soon after his graduation.

Hasrat was acutely conscious of the socio-political condition of his time. Ever since his graduation from Aligarh in 1903 till his death at Lucknow in 1951, he worked incessantly and played various roles as a social activist, a politician, a freedom fighter, a journalist, a critic, a poet, a deeply religious Muslim of a liberal makeup, and a God-fearing communist. Working in multiple directions, he laid the foundation of an influential journal Urdu-i-Mualla, worked for the Indian National Congress Party holding important offices, remained active with Swadeshi Movement, moved the first-ever resolution for complete freedom, and chaired sessions at divergent platforms like Indian National Congress, Muslim League, Jamiat-ul Ulama-i-Hind, and the Communist Party of India which he also helped found.  As he gave the call of Inquilab Zindabad—Long Live Revolution—he always fought for complete independence of India from the British rule. He was imprisoned on several occasions for his rebellious attitude towards the British but he always kept his spirit high without succumbing to any under-hand policy or upper-hand pressure. After India’s independence, he worked as a member of the Constituent Assembly that drafted the Indian Constitution but did not sign it as he had his own reservations in this matter. In all his positions and responsibilities, Hasrat worked in all humility, living a simple life like a dervish with absolutely no place for pomp or pretension in his life. He passed away in Lucknow and was buried there.

Hasrat started composing verse at an early age.  He is acknowledged essentially as a poet of ghazal who combined the best values of the classical and the modernist styles of composition. He kept ghazal alive especially at a time when it was being marginalised and imparted a new lease of life to it. He wrote on the traditional subjects of love and romance but also found a space for the socio-political subjects that represented acute contemporary reality. His works have been included in Kulliyaat-e Hasrat. He has also left behind an annotated edition of Ghaib’s poetry entitled Sharh-e-Kalaam-e Ghalib, and his diary written during his imprisonment called Mushahidat-e-Zindaan. Hasrat has also collected the poetry of the classical and modern poets in seven volumes which bear witness to his critical taste.