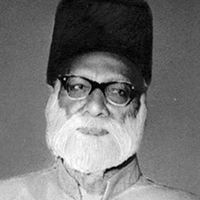 A great champion of the Urdu language, Maulvi Abdul Haqq has been nicknamed Baba-e-Urdu, “The Grand Old Man of Urdu’’. All his life he waged a campaign to secure a rightful place for Urdu in the Indian sub-continent, and it was mainly due to his efforts that the All-India National Congress under clause 21 of its constitution adopted Hindustani (Hindi-Urdu) to be the national language of India. However, after the freedom of Indian sub-continent, Maulvi Abdul Haqq migrated to Pakistan and for the remaining years of his life worked for the promotion of Urdu in that country. Though he succeeded in getting Urdu declared as one of the two national languages of Pakistan, he met with tough resistance in his efforts to replace English by Urdu for official purposes.

Abdul Haqq was born in 1870. He was educated first in Punjab and then at the M.A.O. college, Aligarh, where he was influenced by Sir Sayyed, Shibli, and Hali. From Shibli he learned to pursue his ideal with zeal and fire, and from Sir Sayyed and Hali, the technique of objectivity and precision in prose, which later he developed into a style of his own. He went to Hyderabad in 1895 and, after serving as the headmaster of a local school and editor of a couple of Urdu journals, he became head of Dar-ut-Tarjuma, the institute of translation established by the decree of the Nizam for translating works on history, sciences, and philosophy into Urdu. He also worked as the first head of the Urdu department at the newly established Osmania University. In 1912 he was made the General Secretary of the Anjuman Taraqqi-e-Urdu. Undisputedly, he held that position until the partition in 1947. After his migration, he established the Anjuman’s counterpart in Pakistan, and also started the Urdu College in Karachi which to this day is the biggest non-government Urdu institution in India and Pakistan.

Maulvi Abdul Haqq, though married, left his wife, and never had a home of his own or personal property. He gave himself entirely to the service of the language he so passionately and consistently loved. His steadfast nature, his ability to work hard and long, and the remarkable length of his life resulted in the production of some fifty volumes of literature, besides his editing of the scholarly journal ‘Urdu’, for more than three decades. His style of prose is in direct line from the prose of Sir Sayyed and Hali. He possessed a unique skill of expressing himself in the simplest of language with a marvelous economy of usage and lively touch of colloquialism. His terse, concise, and succinct prose is close to the basic prose style of the Urdu language.
His works include little known manuscripts of fundamental importance for reconstructing the early history of Urdu language. His widely used works, though, are the ‘The Standard English-Urdu Dictionary’, and the ‘Urdu Sarf-o-Nahw’, or Urdu grammar. He died full of honor in 1961.