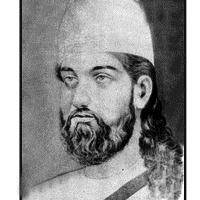 Contemporary of Mirza Ghalib, Aatish was one of the shining stars of 19th century Urdu Ghazal.

Contemporary of Mirza Ghalib, Aatish was one of the shining stars of 19th century Urdu Ghazal.

Khwaja Haider Ali Atish (1777-1847), who hailed from a Sufi family of Delhi, was born in Faizabad. After spending his adolescent years there, he shifted to Lucknow which was then the goal of all literary dilettantes and masters. Neither associated with a court, nor influenced by the privileged and the powerful, Atish enjoyed his self-respect and courage of conviction. True to his spirit, he refused to be carried away by the splendour of the people in high places, and preferred to lead the life of a liberal Sufi and devote himself to the vocation of poetry.

Atish was a disciple of Mus’hafi and wrote both in Persian and Urdu. He is, however, remembered for his Urdu poetry as his Persian poetry has remained untraceable. He was extremely resourceful with the Urdu idiom and played upon the softness of its tone. Striking a balance between the odds and the evens in his poetry, he was now spontaneous now remote, now restrained now sentimental, now ratiocinate now mystical.  His sincere sentiments and robust language blended well to create a condition of lasting appeal. Even while he maintained a uniform level of expression, he also turned wordy and flamboyant at times, but remained simple and eminently accessible.  Atish chose to philosophise on the pleasures of flesh and delve deeper to discover the ecstatic moments of union. The cumulative impact that Atish creates is that of a poet who has a healthy attitude towards life and art and expresses himself with remarkable vigour and vitality. He brought life to bear upon art, and art on life. He has left behind two divaans that exemplify his independent and proud poetic stance.